Our luxury resorts in Cambodia 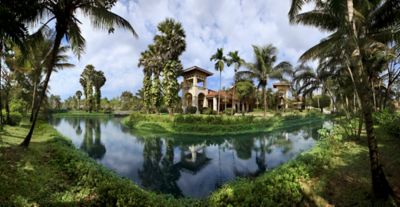 Explore our resorts in Cambodia

Chum reap suor! Welcome to Cambodia, a heady mix of World Heritage sites, lush forests, spectacular beaches and buzzing cities. Amidst the natural splendour and architectural wonders, ALL-ALL has an unbeatable selection of modern resorts and luxury hotels, with everything you need to make your trip amazing.

Cambodia is fast becoming one of the most popular tourist destinations in South-East Asia, with visitors flocking to explore its diverse charms. From the floating bazaar of Tonlé Sap to the jaw-dropping temples of Angkor Wat, from the paradisiac beaches of the south coast to the elephants and tigers that populate the national parks, Cambodia is an invitation to adventure.

Cambodia has two international airports, at Siem Reap and Phnom Penh. There are also domestic services between the two cities.

Once you arrive, there are plenty of options for those looking to explore the country. The much-improved road network hosts a cheap and convenient bus service, as well as countless taxis and minibuses. If you’re feeling more adventurous, Cambodia is a country that loves motorcycles…

No trip to Cambodia would be complete without paying a visit to Angkor, the legendary capital of the Khmer empire. Once lost to the jungle, this sprawling ancient city was home to the Angkor Wat temple complex, the world’s largest religious monument and now one of its most spectacular tourist attractions.

Just south of Siem Reap, Tonlé Sap is the largest freshwater lake in South-East Asia. This immense ecosystem is perhaps best known for its picturesque floating villages, offering one of Cambodia’s most colourful spectacles.

As well as being the capital city and first port of call for most tourists visiting Cambodia, Phnom Penh boasts a phenomenal array of temples and museums, not to mention the royal palace. Cambodia is also blessed with a spectacular coastline, looking out over the Gulf of Thailand. Head south to the seaside resort of Sihanoukville, the gateway to the country’s immaculate beaches and exotic islands.

Cambodia is world famous for its vibrant, flavour-packed street food scene. Amid the excitement and animation of Phnom Penh and Siem Reap, choose from one of the countless hang bai and savour some freshly cooked spring rolls or beef lok lak. And don’t miss the banh chao, a crispy stuffed pancake which is another local favourite.

Cambodian cuisine is renowned for its heady spices, and perhaps the most iconic of them all is Kampot pepper. The country’s extensive coastline and the bounty of the Mekong River ensure a plentiful supply of fresh fish and seafood, and tucking into Kampot Pepper Crab on a white sand beach is an experience you’ll never forget.

Immerse yourself in the history and culture of Cambodia with a stay in the thriving city of Siem Reap. For a romantic experience like no other, revel in the colonial-era grandeur of Raffles Grand Hotel D'Angkor. This historic establishment was extensively refurbished with immaculate attention to detail just a few years ago, offering an oasis of elegance and calm away from the hustle and bustle of the city. The perfect spot for an indulgent honeymoon! For modern luxury and unbeatable services, choose Sofitel Angkor Phokeethra and make the most of the beautiful pool, spa and golf course.

If you’re looking for a base from which to explore Phnom Penh, the “Pearl of Asia,” then Raffles Hotel Le Royal is at once a historic landmark and a lovingly renovated haven of luxury. Also in the capital, Sofitel Phnom Penh Phokeethra offers spectacular services in a convenient city-centre location, complete with spa, sports club and four on-site restaurants.

Cambodia enjoys a tropical climate, and temperatures never stray too far from 30°C all year round. The two main seasons are the rainy season, which stretches from June through to October, and the dry season which runs from November to May.